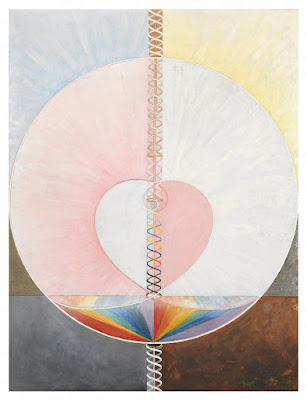 "It is a cold afternoon in February and I am about to catch a plane to Stockholm in pursuit of a Swedish artist whom most people have never heard of: Hilma af Klint (1862-1944). I am hoping to find out more about an extraordinary story – a secret life that was not destined to stay secret. I consider a photograph of her – a daguerreotype, taken in 1885, at the Royal Academy of Arts, Stockholm, from which she graduated in 1887 as a traditional landscape, portrait and botanical painter. The scene is formally set up. She holds a palette in her left hand, an open parasol is behind her. Her face is inward, patient, unexceptional. There is nothing to suggest that this woman, on the quiet, was about to produce breathtaking abstract art as if she was painting in the 21st century – and, in 1906, before Kandinsky, Malevich or Mondrian.

A second photograph, although unpeopled, will tell more. It is of a room furnished with a cluster of chairs including a decorative rocking chair. A plume of feathers fans out above a small table. And it was in this room that, every week for 10 years (1896-1906), Af Klint conducted seances with four other female artists, “the Five” (de Fem). She was the group’s founder and medium (their experiments with automatic writing and drawing predated the surrealists by decades). It was here, in 1904, that Af Klint received a “commission” from an entity named Amaliel who told her to paint on “an astral plane” and represent the “immortal aspects of man”. Between 1906-1915, there followed 193 paintings – an astonishing outpouring – known as the Paintings for the Temple. Whatever one’s misgivings about the occult, she worked as if possessed – in the grip of what can only be described as inspiration. She explained that the pictures were painted “through” her with “force” – a divine dictation: “I had no idea what they were supposed to depict… I worked swiftly and surely, without changing a single brush stroke.”