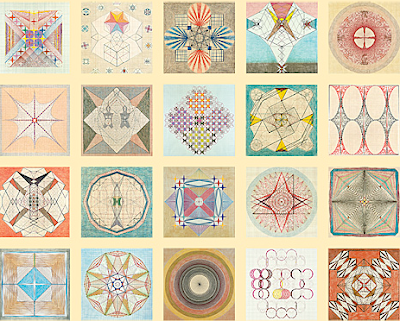 What is art for? For most of its history, art was closely linked to liturgical functions by granting access to spiritual states of consciousness through formal stimulation, symbolic communication, and pictorial representations of mythological narratives. At the dawn of the era of Modernism, many artists sought ways to disengage their practice from depictions of external reality, turning their visual vocabularies inward, to depict spiritual truths primarily through the formalist languages of shape and color.

These works - later reinterpreted as mere stepping stones toward pure formal abstraction - actually functioned as records of spiritual experience (usually integrated in the artmaking process itself) as well as technologies to trigger contemplative states of awareness in the viewer. While some artists sought to transfer the spiritual charge of artmaking to a new, autonomous Church of Art, others linked their work to existing religious systems, as well as the Eastern traditions that were beginning to filter into Western consciousness.

The Los Angeles-based artists in Practice, practice, practice pursue this latter strategy today, producing their non-figurative, non-objective work in consort with a non-studio spiritual disciipline, mostly rooted in ancient religious and philosophical traditions including Christianity, Islam, Buddhism, Hinduism, Amazonian Shamanism, and the cult of the Sumerian goddess Inanna. At a point when the master narratives of contemporary art have become hopelessly garbled and timid, these artists dare to reassert the original and primary function of art making, resulting in profound meaningfulness and dazzling beauty.

Doug Harvey’s curatorial projects have ranged from many traditional gallery exhibitions (including the short-lived Annual LA Weekly Biennials and 2008’s Aspects of Mel’s Hole: Artists Respond to a Paranormal Land Event Occurring in Radiospace) to CD compilations of sound art, programs of found and experimental films, performance events, experimental radio, artist’s comic books and zines, and an LA solo gallery exhibit determined by raffle. In July 2011 his global project (with Christian Cummings) Chain Letter 2011 included work by 1600 artists in its incarnation at Shoshana Wayne Gallery in LA, shutting down the 10 Freeway exit to Bergamot Station during installation.
Posted by DougH at 10:46 PM