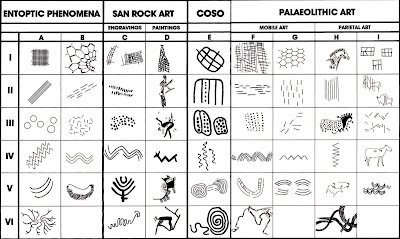 [In archaeology, the term entoptic phenomena relates to visual experiences derived from within the eye or brain (as opposed to externally, as in normal vision).]

"In the 19th century, European and American opticians, physiologists and philosophers developed a broad interest in entoptic phenomena. To generate and study entoptics, they conducted experiments by stimulating brain and retina, electrically at first, later also with mind-altering substances. Especially in the 1960s and 70s, a number of experiments on subjects were conducted using agents such as THC the active ingredient in marijuana), mescaline, psilocybin and LSD. A worldwide ban on these substances interrupted the drug based research on entoptic phenomena.

In 1988, two South African archaeologists referred to this heritage of the 1960s and 70s when they presented an alternative interpretation of stone age rock art of a certain kind. In a sensational publication, David Lewis-Williams and Thomas Dowson observed that the rock and cave art of the later Paleolithic (about 40,000 to 10,000 BC), the time when man (homo sapiens) developed abstract thinking and art, is characterized by two main themes: vivid depictions of animals on the one hand, geometric figures such as dots, circles, lines, curves etc. on the other.

Ever since the discovery of the European Paleolithic caves, archaeologists have been wondering about the importance and meaning of such geometric representations. Attempts to explain them in terms of totemism or magical rituals were hardly convincing to the research community. Lewis-Williams and Dowson brought forward the original thesis that Paleolithic art is inspired by subjective visual phenomena, seen and depicted by shamans or spiritual men and women during altered states of consciousness..."

Read the rest of "Entoptic artifacts as universal trance phenomena" by Floco Tausin here: http://www.viewzone.com/entoptic.html
Posted by DougH at 12:53 PM