The Short Bright Day of the Soul 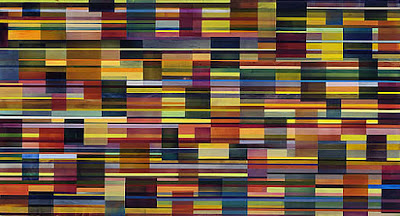 Among cognoscenti, Linda Day was known for many years as one of the most accomplished abstract painters working in her adopted home of Los Angeles. A masterful colorist, Linda’s work often relied on subtle modulations of hue -- whether presented as scaly biomorphic blobs or cool, faux-digital striations. Her work always conveyed a sense of phenomenological engagement -- an unironic commitment to exploring painting’s formal vocabulary and its capacity to impact and alter the viewer’s consciousness. 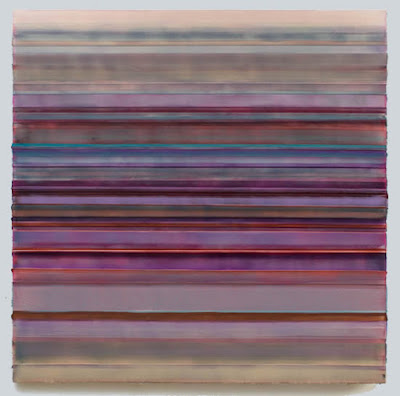 Any suggestion of New-Agey philosophy, though, would have been met with a dismissive snort. Linda was strictly Church of Art -- a Modernist for whom abstract painting had provided a tangible manifestation of of a hardwired technology of sensory-based psychological transformation. In my essay for the catalog to her “Horizons” show at Jancar Gallery in 2008 I wrote: 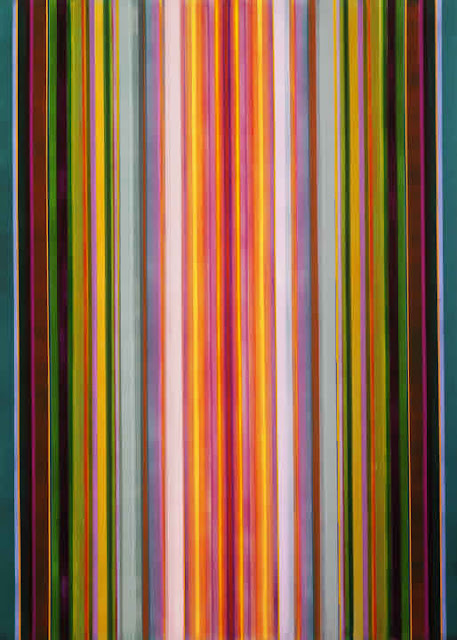 
Day’s work is directed toward the activation of this co-creative feedback loop, and her aesthetic decisions can be traced in part to the gradual tweaking of the parameters of this relationship... direct[ing] the viewer away from passive engagement with sequential narrative tropes, kicking away the conceptual crutches so that these subtler visual mechanisms move to the foreground, and empowering the viewer to determine the durational parameters of their engagement with the painting less encumbered by a framework that suggests a beginning, middle and end to the experience.

“Kicking Away the Crutches in Bullet Time: Day’s Long Journey into Now” 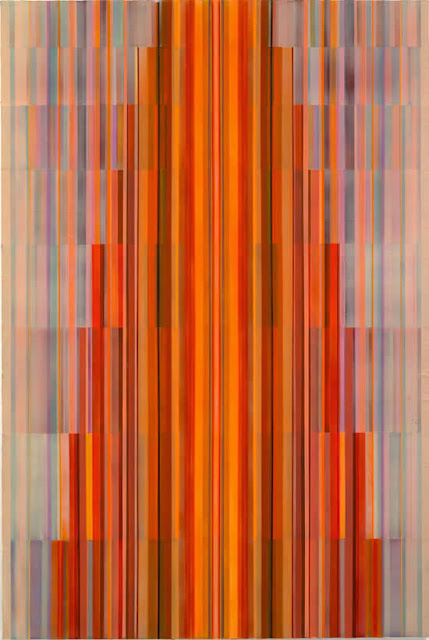 Linda’s work seemed to be -- somewhat paradoxically -- on a course of incrementally, precisely honing the technology of perceptual feedback, and the suspension of Time. Then, something happened. In 2010, she participated in a residency at Sanskriti Foundation in New Delhi, India

For her last solo show OU-BOUM (at Another Year in LA at the PDC), Linda debuted a body of work that was deeply transformed in relation to her earlier oeuvre, although her virtuosic formal skills translated effortlessly. As she observed in her notes for the exhibit:


“My work goes through periods of refinement followed by those of disintegration in which I re-examine and dismantle.... my experience in India provided me with the impetus – and the inspiration – to begin again within the framework of the past. This is not merely an interest in the exotic – but an embrace of new and increasingly complex hybrid relationships in art and the culture at large”. 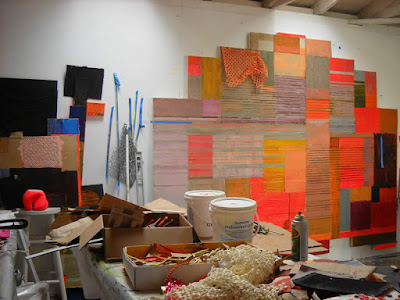 The show title refers to  E. M. Forster’s  “A Passage to India,” in which the protagonist’s western rational worldview is overwhelmed by the experience of the echoing void of the fictional Marabar Caves, whose voice manifests as “ou-boum.” Linda commented


”I have begun to see Forster’s “ou-boum” as touching upon the sublime. The aesthetics of the sublime has been investigated historically – from the Greeks, to the philosophers Edmund Burke, Kant, Hegel, and the more contemporary Lyotard. To simplify the sublime is largely experiential and the result of an overwhelming event in which we, as participants are physically and emotionally engulfed. Unable to define our own boundaries within the experience, we are at once filled with pleasure and terror.” 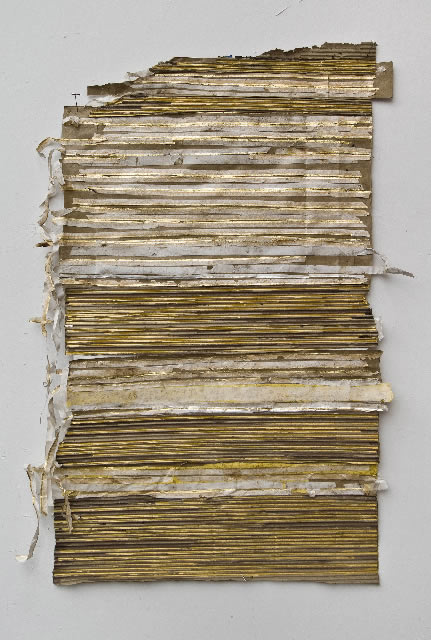 The work itself was scrappy and rough hewn. Where Day’s previous series of paintings had tended to a precise rectangularity and tightly controlled surface, the OU-BOUM works were organically expanding collages of corrugated cardboard and other (mostly paper) materials. Those familiar with Day’s masterful collage work (one of the best shows of the early days of ACME was 1997’s Linda Day: Drawing Project, a linear, taped-together experimental narrative or musical score) knew that she was extremely fluent in that visual vocabulary, but when infused with her newly Indianized color palette, a synergy occurred. 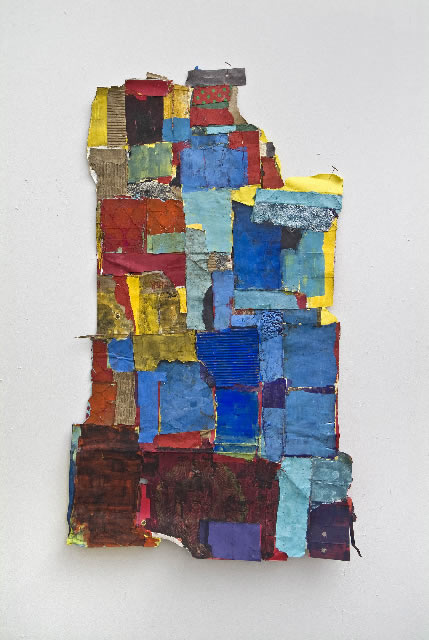 The show had a tremendous sense of warmth and vitality, of playfulness and pathos -- LA critic Peter Frank compared the assemlages to “discarded shelters or decorated walls” found in a “tropical shanytown” - which pretty much sums it up. Peter goes on to absolve Linda of any taint of exoticism or colonialism, but claims they “resist the no-up-no-down infinity  implied in the sublime bliss of Forster’s -- and Day’s own -- India.” I see it a little differently --  possibly because I know that Linda died of non-Hodgkin’s lymphoma a few months later. It seems to me that rather than resisting the shining void, Linda was embracing it -- confronting and celebrating fragility, mortality, time, and awareness. In spite of their rickety materiality, the OU-BOUM works are imbued with luminosity and seem to levitate, brimming with good humor. 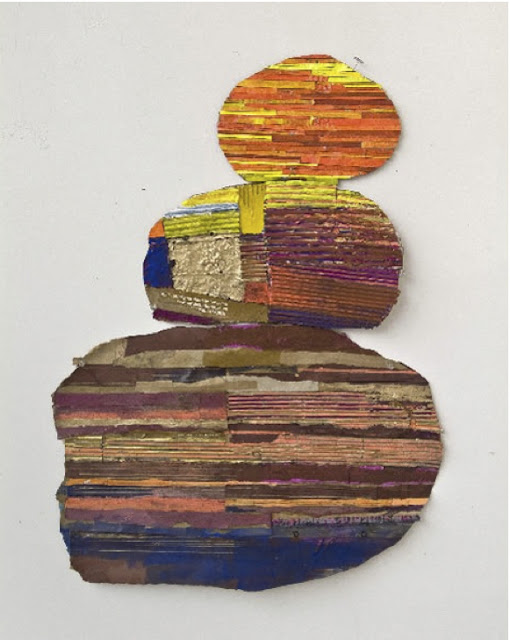 And sadness.  The image chosen as the anchor for the practice, Practice, practice show is genesch, a 30 inch short stack of painted cardboard discs, immediately conjuring associations with sunsets and a Buddha-like figure sitting in a contemplative reverie. But these figurative readings recede in the sensual immediacy of the object itself, and the rippling bubbles of color gradually modulating from dark earth tones to near-fluorescent yellows and oranges ultimately seems to embody a process of literal enlightenment, a purification or distillation of vibrational energies (AKA color). Of course, I could be reading it backwards. But Ganesha is the god of beginnings, and besides -- backwards, forwards, whatever. The sun sets, then rises, then sets again. 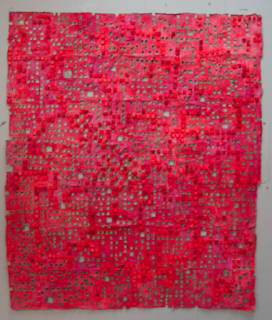 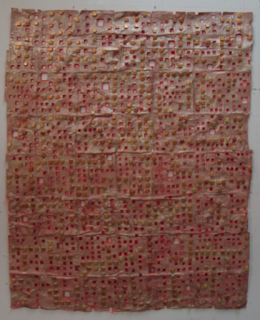 The untitled, previously unexhibited OU-BOUM diptych I chose to include as Linda’s second piece for pPp turned out to be a double-sided work, with one red/silver square and one pink/gold square, each perforated with a New-Delhi-boogie-woogie of square holes, and studded with tiny cubes (square pegs! square pegs!) of painted something - foam-core maybe? There’s something of the illuminated manuscript at work here -- albeit one written in interdimensional braille by Tantric aliens. It’s a system of interrelated, but unparseable grids, impossible to see all at once, offering a sumptuous diagrammatic glimpse of a section of Indra’s Net, the Vedic web of interdependent holographic points of consciousness that are the underlying structure of reality. And the colors aren’t bad either! 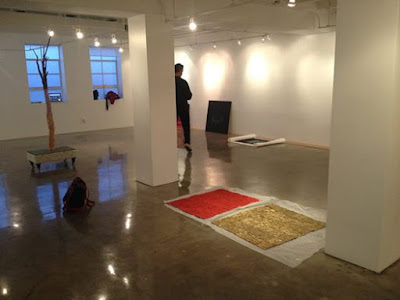 The Curator at Work (photo by Pat Nickell)

Dark Night of the Soul by St. John of the Cross free audiobook!
Posted by DougH at 11:45 PM